A Journey Back Through Time

Video of A Journey Back Through Time 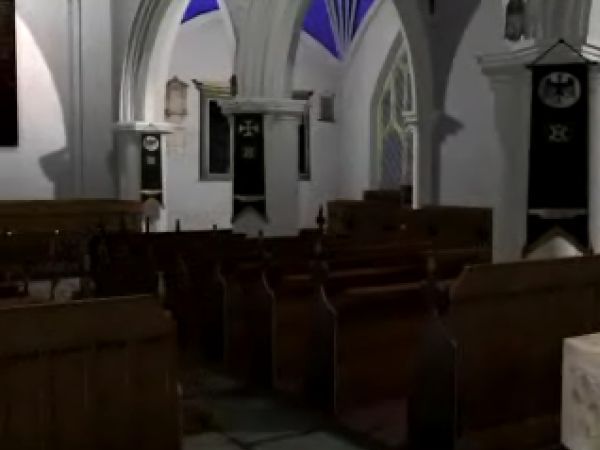 To watch the video, click on the image above.
-
[Download the WMV version of this video (35.7mb)]

What Does This Video Show me?

In this video you will be taken on a journey back through time. You will see how the Great Hospital has changed since its foundation in 1249, and discover how the building would have appeared during its heyday in the fifteenth century.

Starting in the present day, the video first explores the nave of St Helen's church, and what would have been the chantry chapel. Watch out for the chapel's roof bosses, a carving of St Margaret on a bench end in the church and the arms of John Molet. Note too that the wall between the nave and chancel, and between the nave and the infirmary, are now blocked up.

It is at this point that we start our journey back through time. First, the hospital's walls are stripped back to reveal how they might have appeared in the fifteenth century, and the plain windows are replaced with stained glass. Next, the wall between the nave and the chancel, inserted in the sixteenth century, is removed. Flying over the reinstated rood screen, you travel the length of the chancel to the east end where the high altar has been reinstated in front of an impressively tall window (now blocked up).

Retracing your steps, you will then sweep past the eagle roof. The discrete upper-storey for women, introduced by the civic authorities during the sixteenth century, has been removed to reveal how impressive the chancel would have appeared when it was constructed in the late fourteenth century.

Next, the video revolves to face the wall between the nave and infirmary. The wall, inserted in the sixteenth century, is removed and the great west window is filled with stained glass.

Finally, you turn right onto on the north aisle of the infirmary where patients are seen resting in shared beds, each of which would have been well furnished with covers and pillows. The journey is completed by returning to the high altar - the focus of spiritual care in any medieval English hospital.